What are the types of Double Futon? 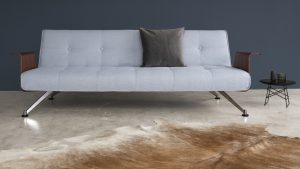 A double futon sofa bed is either a frame in three sections that folds across its width twice and has a futon mattress about 6” thick and seats two adults or a frame in two sections that folds along its length with a futon mattress hopefully 8” thick and seats at least three people. The early days of the futon industry only had two seat double frames to offer, the three seat double frame came to prominence in the 1980’s during the first major expansion of futon furniture.

The 2 seat double futon frame or “A” frame has a smaller footprint than the 3 seat version but when they are pulled out as a bed they are the same size, the difference is that the former folds North/South and the latter East/West for instance. Extremely versatile and useful in any room of a house or apartment, a double futon functions as well as a bed as it does a sofa.

A double futon is made from various timbers, softwood like Pine or hardwoods like Beech, Birch or Oak. The alternative to timber is steel, European gauge steel has higher specifications than Asian steel and is much more robust. Manufacturing specifications in Europe are higher and for increased comfort flexi slats are used for the sitting and sleeping surface whereas in China, Malaysia and Indonesia many manufacturers use wire mesh or steel tubes. The comfort and strength of flexi slats is far superior to the mesh type frames but they are a little more expensive.

If you want to make better use of a spare room or have a stylish contemporary look for your living or bedroom, the dual function i.e. sofa and bed double futon is a creative choice at an affordable price. As the futon industry has grown over the past 40 years and penetrated markets world wide the main piece of futon furniture is the double futon.